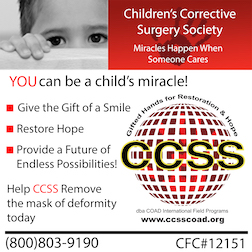 Because Everyone Has The Right To Look Human.

In a remote Mexican Village there was a little girl named Martha that everyone called, "Cochina". To most people it has a pleasant sound, but in Spanish it means, "Little Pig Girl";. She was ostracized by her village and not allowed in school. Her family contacted CCSS/COAD . It took the combined efforts of family and neighbors to "capture" her so that we could show her some pictures of other children we had helped. Struggling and writhing on the ground, she suddenly comprehended what the pictures meant. She stopped struggling and her deformed face burst into a broad smile. A sparkle of hope came into her eyes and as far as she was concerned the operation was already done.

Whatever your gift may be, it is an answer to a prayer for both child and parent. It is a gift of transformation that lasts a lifetime. Remember, there are many "Cochinas" waiting to become "Marthas."

Martha is now happily married and has a healthy son.