Imagine the trauma of a child separated from all they know - parents, possessions & home. We provide duffels filled with new belongings to abused & neglected kids rescued from tragic situations, arriving possession-less at crisis shelters. 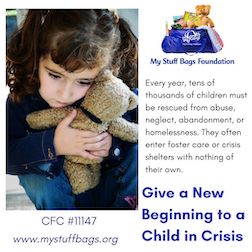 An excerpt from a letter expressing the importance of a My Stuff Bag:

"Once again paged to respond to the police station, I was told there was a 10 year old boy awaiting foster placement whose mother had been murdered. Of course it was awful; deep grown-up pain for a child always is...When he and I had some quiet time, I gave him the My Stuff Bag. He began going through it very timidly. "Is it okay if I look at the baseball cards?" he asked. I told him all of it was for him. He looked up at me, face still wet from tears and said "but you don't even know me!" As I choked on my words, I told him that everything in the bag was for him, made especially for him, from people who cared about him. He dropped the bag, covered his face, and wept openly and said "But they don't even know me either!"...I told him that each time he looked at the My Stuff Bag or anything inside, to remember he wasn't alone, that people loved and cared for him." ---T.P., West Valley Crisis Response Team